Kevin Kelly’s famous article on 1000 true fans is a must read for creative types. When looking to build an audience, we don’t need millions of followers, so much as a core group of fans who enjoy your material so much they’ll buy anything and everything you sell. These fans are going to be your core group who keep you going. These are your true fans[1]. Kelly’s classic article was written during a period of massive growth in Web 2.0, when Twitter and Facebook began to get popular, and before bitcoin was invented. It remains true today.

Steemit is a platform that allows users to monetize a variety of digital content, from articles, to podcasts, to video. It costs nothing to join and is free to use. The economics of Steemit may seem a little complicated, but posting and earning rewards is simple. There is nothing to lose by posting content on steem before crossposting to Medium or YouTube.

Steemit can be used casually without any expectation of profit, but many of us in the information age are trying to supplement (or replace) our income and create meaningful content from anywhere with an internet connection. 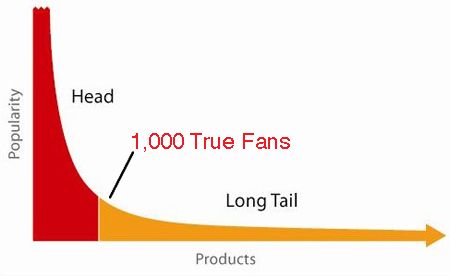 Right now I have a little under 500 followers. If the 20 percent rule works, I have nearly 100 true fans. But that’s not exactly right, as I’ve not sold nearly enough of my eBook to support that hypothesis. Perhaps 20% of my followers are actually regular users of steemit, which means 20% of that group might be true fans. So 20% of the 20% (4% of the total) are my true fans. I’ve sold 25 books, and a few of those are family and friends, so that number is in line with the true fan theory.

Nevertheless, my sample size is small. I joined steemit in July of 2016, so I may have followers who have abandoned the platform since my first couple posts. Many of my followers may not have access to Amazon, and some are flat out bots! But there is a core of you out there who are reading and enjoying what I write, and I am thankful for that.

How do we find one another? I think the best way is by commenting on others’ posts. Let’s investigate which posts to comment on.

There are a few mega stars on steemit who have a 70+ rating and hundreds of comments. Generally, I don’t comment on mega threads, in steemit or otherwise. If you’re not in the first few comments, yours will get buried. Our time is worth much more than that.

However, there are plenty of steemians who are hacking away and learning steemit, who are hustling every day to build relationships and create good content. Here we all are, trying to learn this next generation blockchain enabled social media co-op, and it’s a team effort to make-and keep-this platform great.

I’m going to make it a goal to comment on others’ posts every day. I’m not sure what the number will be yet, because I need to ensure I balance work and family before steemit, but I’ll see if I can get 5 thoughtful comments a day posted outside of people I currently follow. I challenge you to do this as well!

The world of cryptocurrency is young, and there is a lot of risk investing in these assets. For that reason, I avoid making carte blanche statements about what cryptocurrency to buy. I’d rather focus on protecting you from making awful mistakes and losing a bunch of money. Personally, however, I have a good deal invested in steem power. And while it is hard imagining the price of steem dropping below $1 again, it is certainly a possibility (that’s a weird turn of phrase…). If I lose my investment in steem, but gain 1000 true fans, I win.

This is why Steemit is such an important tool for creatives. Earn money while you build your audience, and there is the possibility that the price of steem continues to rise and you do even better than expected.

Find Your 1000 True Fans on Steemit

Steemit brings new incentives to monetizing content online. Many of the legacy social media platforms have become obnoxious and divisive, with more nimble users fleeing to other platforms that better connect them to like minded people. Steemit gives us all the opportunity to build an audience that attracts those who share our interests.

Have you found your 1000 true fans yet? I’d love to read your comments below. What are your plans with Steemit?

[1] While Kelly uses the number 1000, with the goal of selling each of those fans $100 worth over a year’s time for a $100,000 annual income, he points out that the number is not set in stone, and can be changed depending upon your needs.

Check out my book for more information on cryptocurrency trading. Free for Amazon Unlimited readers!